I decided to start 2010 with a controversial premise:  what if 9 out of 1o patents--or 90 %-- issued in the US were worthless?  Believe it or not, but this probably is not too far off the mark.  By "worthless," I mean that it is likely that only 10% of patents in force today meet each (and every) of the below criteria:

1)  The patent directly or indirectly protects a product or technology that is being sold in the market today;

2)  The patent covers a product or technology where there is or likely will be viable competition in the marketplace such that a patent is needed to legally restrain competition; and

3) The patent owner is ready, willing and able to bring a patent infringement suit against an infringer or it is likely that your competitor believes that it will possibly do so.

The 2009 Open Innovation Summit was held in Orlando two weeks ago.  The event was attended by corporate practitioners of Open Innovation, including people from P&G, GSK Consumer, Cisco, Whirlpool, J&J, HP (here are Phil McKinney's slides), Clorox, and many others.  Leading consultants in Open Innovation also attended, including Stefan Lindegaard of Leadership+ Innovation, Braden Kelley of Blogging Innovation and Robert Brands of Innovation Coach.  A number of vendors of services were there, too.  I thought this was a great knowledge share event, and a must do for folks wanting to learn more about Open Innovation.  Another Summit is planned for August 201o in Chicago. At the Summit, we spent much of the 3 days hearing how the attending companies, many of which include those in the Fortune 100, view Open Innovation as a critical aspect of sustainable growth and profits.  We also heard about

The view that a good idea will result in a windfall for an independent inventor seems to be embedded in the fabric of US culture--perhaps it's because the patent system dates from our earliest days.  Indeed, a surprisingly large number of people think that getting a patent will result in a large company paying them huge sums of money for the ability to introduce a product covered by that patent.  This belief serves to motivate countless numbers of inventors to spend $1000's on patent protection, as well as years of hopeful waiting for their patent to exit the Patent Office.  Few ever see their product make it to the marketplace, however. As an attorney at a prestigious IP law firm, I really gave little thought to what my clients would do with their idea once I succeeded in obtaining a patent for them.   My job was to help my clients convince the Patent Office that their

Read More
Many people assume that corporations will readily consider good ideas from external sources, presumably because from the outside it makes sense to do so.  That is, why should a corporation spend the time and money to create something from scratch if someone else has invented a product or technology that is a good fit and can be acquired at a reasonable cost?  Against this assumption, countless numbers of inventors have expended considerable time, money and hopes on patenting their inventions and submitting them to corporations for review.
The sad truth is that most of the money and efforts of these hopeful inventors are wasted.  Few corporations today have policies that make it possible for their employees to gather unsolicited ideas from outside of their existing employee or supplier base.  Ideas sent to the corporation by outside inventors rarely get reviewed for merit by the relevant business teams.  Rather, after the inventor submitting the idea is
Read More

While we can argue about the exact amount, without question, intangible assets form the majority of corporate value today. Matters involving IP are therefore predominately business issues, as opposed to legal issues or technical issues. For example, IP in the form of patents or trademarks (or both) frequently serves as a basis of the premium pricing that can be obtained from a differentiated product line. Also, IP directed toward a competitor's technology can legally limit the ability of a competitor to expand its offerings, thus decreasing its ability to compete. There are many other examples of the business value of IP, all which when strategically obtained and managed can greatly increase the overall financial position of the corporation using IP as a business tool. Notwithstanding the substantial dollars associated with corporate IP decisions, most organizations leave questions of IP in the hands of their legal and technical teams. Of course, many

The Slideshare presentation that follows is an excerpt from a class that I am teaching to in-house legal managers about innovations in IP management. The topic of the presentation is innovative methods to reduce IP legal procurement and management costs. The goal of my presentation is not to get corporate IP types not to think outside the box but, rather, to think outside the truck the box came in. As such, many people may think these ideas are "way out," but if you start with small ideas, you end up with small improvements. 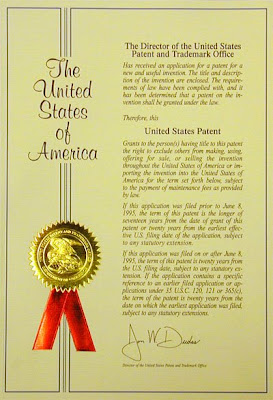 Notwithstanding the vast corporate and entrepreneurial resources expended each year to file, prosecute, manage and maintain patents, a significant majority end up having little or no business value to their owners. Patents can end up being worthless for any number of reasons, most of which center on the fact that the claims do not cover a product or technology either currently or in the future being made, used or sold by either the owner or a third party. And, when a patent does not cover a current or future product or technology, one might argue its only residual value is as the attractive government document on the right. No doubt exceptions exist to my bold assertion that most patents end up as worthless to their owners. That is why I used the

NOTE TO READERS: Since I am on vacation this week (well, sort of), I have asked my friend Scott Garrison to pen a piece about IP Strategy for me. He has been so gracious to do so, and the post follows. At bit about Scott: Scott Garrison is Chief IP Counsel and Assistant General Counsel for Scientific Games which, among other things, makes scratch off lottery tickets. Prior to joining SciGames, Scott was a senior IP attorney at Kimberly Clark and, prior to that, was a law firm patent attorney. Scott Garrison is a true IP Strategist and I am pleased to present him a forum to express his views on this blog. Scott's blog post: A short while ago I had an interesting conversation with an out of town acquaintance named "Mike" who works at a large international B2B ("business to business") corporation. I was interested to find out that his

As legal service fees continue to rise five percent or more year after year, corporate IP managers, such as Chief IP Counsel and the like, continually face pressures from their management teams to reduce outside counsel legal expenses. The current economic downturn has also resulted in corporate legal budgets being slashed, thus increasing the pressure on corporate IP managers to reduce outside counsel costs, even while IP asset value is becoming more important to C-level management. As a result, the need for corporate IP managers to achieve outside counsel fee relief while at the same time maintaining IP legal service quality is more acute than ever today. Today, there are a number of commonly accepted methods to achieve outside IP counsel fee relief including fixed (or "capped") fee arrangements and a percentage reduction per total hours billed, as well as electronic billing systems set up to automatically audit law firm bills.

As a self-described "Recovering Patent Lawyer," I am now effectively an outside observer of the way the patent business is conducted in the law firm practice environment, and how corporate and other clients purchase patent legal services.  In this last year in which I have re-invented myself as an IP Strategist, I have come to firmly believe that the basic patent law firm business model contains a fundamental flaw:  outside patent counsel can make money only when they actually do work for their corporate clients.  As such, there is no value when a patent attorney (or her law firm partners) tells a client that he should not pay you for the attorney's expertise.  This necessarily sets up a tension between what the best interests of the law firm attorney and those of the corporate client.