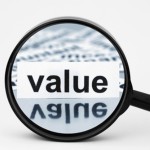 Many business people are surprised to find out that all patents are not created equal.  A recent study of Fortune 500 companies reported in Suzanne Harrison’s Edison in the Boardroom Revisited indicates that only a very small number of patents–namely, 5%– obtained by these top patent filers created strategic value for their owners.  If only 5% of the most sophisticated companies, all of which have veritable armies of patent professionals on their teams, can get patent protection right, it must follow that less resource-rich companies have an even lower probability of gaining strategically valuable patent protection.  This and the next few blog posts will aim to help improve the odds for business people seeking to learn how to generate more valuable patents.

Examples of strategic patents that should immediately come to mind are the Amazon.com “1 Click” patent and the Apple “Slide to Unlock” patents.  Each of these resulted in the requirement that to avoid infringement competitive products were required to use somewhat inelegant substitutions for the performance features found by consumers to uniquely address their unmet needs in the respective e-commerce and smartphone categories.  In short, the aspects covered by these Amazon and Apple patents effectively covered the functional essence of why the customers found the products superior.

An example of strategic patents in the consumer products space are the disposable cloths used in the Proctor & Gamble Swiffer Wet Jet® mops.  While certain features the mop itself was patented, these specific features were arguably not critical to the consumer acceptability of the design.  Instead, P&G patented the specific functionality of the disposable cloths that embodied the essence of the performance that met the consumer’s need, namely, the ability to see if the pad needs to be replaced.  While competitors tried to gain traction in the market with “Swiffer-like” products, P&G has for many years dominated the market for re-usable cleaning cloths which, as laid out in this analysis of Swiffer’s innovation and go-to-market strategy, was virtually non-existent in the late 1990’s when P&G first entered the market.  Notably, the re-usable cloths (and the one-time-use cleaning solution refill) are critical to the “razor and blades” revenue model that has made the Swiffer line of products a virtual cash cow for P&G for many years.  By recognizing the value of patenting prior to the emergence of a new consumer market, P&G was able to keep its competitors “innovating around them” in order to compete along side them.  This likely kept other competitors out of the market as a result of the risk and/or cost of doing so.  I would also argue that the consumer benefited because the inability to compete directly because of patent P&G’s patent protection required the product designers to go the extra mile instead of making lame knock-offs.

So, what is the main factor defining whether a patent is strategic?  I think that the key metric defining a strategic patent is that the claims will cover not just the invention, but also the innovation.  In other words, an invention comprises the specific answer to a consumer need; an innovation encompasses a significant aspect of the consumer need itself.  By definition, the former is narrower than the latter because consumer needs can most likely be solved in a myriad of ways, some of which are better than others.  The features of the way a need is solved will relate in large part to the decisions made by the innovator for good reason, bad reason or no reason at all.  In contrast, the reason(s) that that the consumer selects the product–the “why buy”–characterizes the innovation that should be protected.

Before someone gets hung up on making sure that they are obtaining a suitably “strategic” patent, a good thing to remember is that patents rarely matter, but when they matter, they matter a lot.  Certainly, it will be much more expensive to generate the broader patent coverage.  The skill of the patent attorney will have to be better-than-average (something that does not necessarily correlate with greater cost, unfortunately).  Accordingly, when embarking on obtaining patent protection, business leadership, must first understand how and in what amount the patent will create business value.  If having patent protection will only marginally affect the overall value of an innovative business model, then only marginal effort (and expense) should be committed to the patent.  But if the patent will be key to capturing and realizing the value of that same business model, one must work toward ensuring that the patenting efforts will enable the desired business result.

In the next post, I will further breakdown the key differences between the 5% or less of patents that are strategic and the other 95 plus % patents that likely are not.