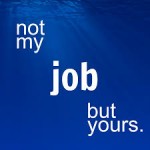 From the last post, we see that it is very rare for patents to create value for their owners.  Moreover, if the “big guys” with pockets deep enough to hire the best lawyers can get it right only 5% of the time, there should be no doubt that smaller companies and individuals should re-examine the advice they are getting from their IP counsel.  This is not to say that smaller companies and individuals cannot be successful in creating market-defining patent protection.  To the contrary, it is my strong belief that small companies can create solid patent protection at a reasonable cost, but to do so will likely require patentees to recognize that their IP counsel likely has no clue how to do what you need done.  And, even if she does, it is not her job to make you money from your patents.  Instead, her only job is to get you a patent.  Period.  End of story.

Smaller organizations or individuals should not assume that that your attorney does not have your best interests in mind when doing patent work on your behalf.  Certainly, the vast majority of patent attorneys are ethical and have their client’s best interests at heart.  But, as noted, their job is to get patents on behalf of their client, not to get valuable patents.

We get a picture into this reality in a recent appellate case in which a disappointed patentee tried to sue his patent attorney for malpractice.  In this case, the patentee asserted that his attorneys, who worked at a prestigious patent law firm, acted negligently when prosecuting his patent for a weed trimmer guard by including unnecessary language that limited the patent’s scope.  He claimed that addition of this language resulted in his losing an infringement suit against Stanley Black & Decker.  In order to demonstrate that his attorneys’ negligence resulted in his loss and to recover damages for legal malpractice, he was required to prove “the case within the case.”  This essentially means that the patentee must show that the errors or missteps in the patent prosecution process by the attorney led to his inability to recover against Stanley Black & Decker in the patent infringement case.  It should be apparent that the likelihood of proving that a decision made by the attorney during the patenting process–and only during the patenting process–could be blamed for the client’s inability to recover is an exceedingly tough thing to show.

The lack of responsibility felt by patent attorneys to obtain valuable patents on behalf of their clients is widespread.  In this regard, I participated as a panelist in a large meeting of experienced patent counsel where this malpractice case was discussed.  The question was posed to the group as to whether patent attorneys are ethically obligated to ensure that their clients obtain patents that are valuable–that is, are infringed by competitors.  Uniformly, the response of this group of high level in-house and outside patent counsel was that no such ethical obligation existed.  The reason given for this lack of responsibility most was grounded on the premise that  “the client is in charge of the patenting process and I just take orders.”   When I pushed back to the group by pointing out that the client hires us to generate valuable patents on their behalf and relies on our expertise to do so, there were numerous variations of excuses that centered on the theme that “I’m not the inventor and I don’t know the market.  I just act as a conduit to the Patent Office for the inventor.”

Therein lies the rub!  If it’s not your attorney’s job to ensure that the patent they obtain on your behalf creates value for your business, then it must be your job.  But what does it mean to generate a “valuable patent?”  Again, we are back to understanding the difference between a patent that covers just a product vs. one that defines and protects a strategic position in the marketplace.  To do this, and as I have stated before, you have to be able to identify the nature of the innovation that you provide to the marketplace, not just the specific way–that is, the invention–that you provide the innovation to the consumer.

Against this reality, those seeking patents for the purpose of eliminating competition in their market (as opposed to their product), must wrest control of their patenting efforts from their attorneys.  While it can be comforting to turn over patent matters to your attorney to handle, you need to recognize that you have, at best, only a 5% probability of obtaining strategically valuable patent protection.  In other words, it is almost impossible for someone to obtain patent protection that, as I often say, “makes it cheaper for your competitor to go through you.”  It is possible to improve these odds, but not without first recognizing that what you think your attorney does for you is not what she thinks she does for you.  In short, those seeking to obtain strategically valuable patent protection must be the master of their own destinies–at least when it comes to dealing with their IP matters.

In the next post, I will provide actionable instruction on how you can make this happen.

One thought on “Strategic Patenting Part 2: It’s Not Your Patent Attorney’s Job to Get it Right”